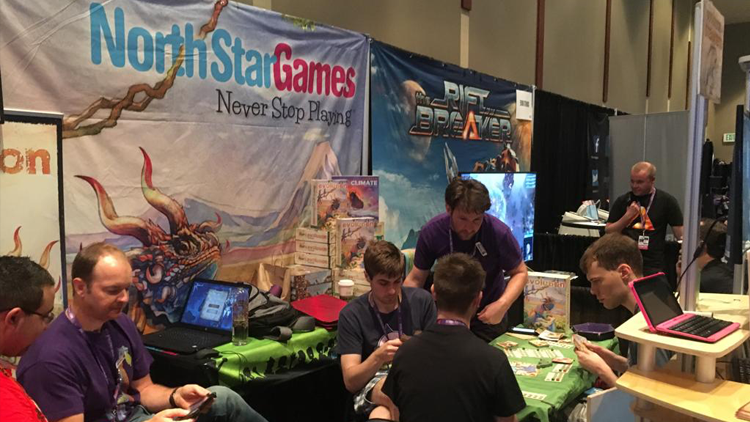 We had a great opportunity to attend one of the world’s greatest gaming festival in Seattle, WA. Hashbyte Studio is one of the eminent game development companies in India. We are a team of young avid game lovers who aspire to create something innovative in the gaming world. Though we are a startup, we got a chance to work with North Star Games for two of their projects.

North Star Games is a big shot in the gaming industry. They are a famous board game publishing company and has been publishing games since 2003. One of their board games, Evolution is an award-winning board game and the game is about adapting to environmental changes. Likewise, it is also available in a digital game. Now they have decided to extend it to the Nintendo switch, and guess what? we are responsible for it. This is a big opportunity for our studio to display our skills to the world.

PAX (Penny Arcade Expo) is a game festival, held in different parts of the US and in Melbourne, Australia. It is an exclusive event conducted for the arcade, tabletop, and console games. This event is conducted every year to celebrate and unite the game lovers all over the world. You can come across many people in this event.

Generally, the event starts with a key speech by an industrial insider, panels on game topics, concerts inspired by game-culture, tabletop gaming tournaments, exhibitor booths from both major and independent game developers and publishers, video game free-play areas, and LAN party multiplayer. Since the event took place in different cities, the event which took place in Seattle is called PAX West. The event takes place for 4 days.

This year the PAX event took place from Aug 30th to Sept 2nd. Our CTO Bakshish Singh had the opportunity to attend this grand event. This was a proud moment for him and our studio. After checking-in the hotel, he met our clients. Since he has already been in touch with them via video/skype calls it was easy for him to get along with them.

The event took place at the Washington State Convention and Trade Center. The exhibitor’s booth was allotted to the game publishers and developers to showcase the exhibits.

Once when the exhibitors were ready with their exhibits, the media and press were first allowed to enter the venue and take a look at the games. Finally, the public entered the venue.

Bakshish was overwhelmed by the crowd. Because he witnessed people from all over the world came to attend this event. The reason behind the event is gamers get to see their favorite game’s new version, character introduction, exclusive goodies that are not available outside. Some of the game lovers wore cosplay costumes for the event of their favorite game characters. To get to know the kind of love people had for the games encouraged us to push our boundaries.

In the stall, they had displayed the game along with goodies like pins (long neck- famous character in Evolution), Steam keys, and a combo. Since the board and digital version of the game is famous among the players, people were excited about the Nintendo Switch version.

An enthusiastic 9-year old player came with her father to play the Nintendo version. She was excited to play the game. Upon seeing her involvement, the father enquired about the game and its launch. Similarly, the team had many audiences visit the booth and ask about the game. This indicated how much people are anticipating the project we have been working on. It was blissful.

On the third day, the press came to visit the booth and they presented the game with the switch. The press had an exclusive interview with Scott Rencher, the President of North Star Digital Studios regarding the switch version of the game, the reason to use the switch, its gameplay and others. Even they were excited to see the game.

Bakshish visited other booths and had a chance to play other games. Borderlands 3 was one of the main attractions in the PAX event. Gearbox Software showed a live stream of the gameplay and the new features of the game before its release. They also conducted game challenges and the winners received t.shirts.

The best part about this event is we get to meet people from your own field and knowledge sharing takes place (both technical and non-technical). He met the Battlefield designers of Final Fantasy game. It was wondrous to know there is a team that focuses on the rules of the battlefield in the game.

Bakshish got a chance to meet a Graphic artist from Saga. And got to know the detailed work done by them and the artflow they follow while approaching a character.

After the event, he went to dinner with Scott and his team. The food was yummy and they spent more time talking about the event and the project. They also guided him to explore a few other places.

“The noblest pleasure is the joy of understanding

The PAX event is a reunion for like-minded people who solely love playing and developing games. Certainly, Bakshish had a wonderful experience. He showcased the Nintendo switch version of Evolution, took pictures with game characters, or meeting wonderful people. It was truly a learning experience for him.