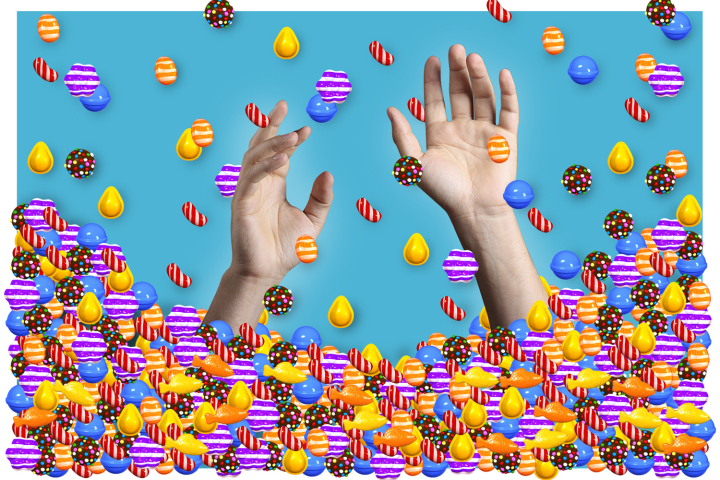 Nowadays, mobile games have become an addiction to people of all age groups. And are ready to leave their office and household work to play the mobile game. Among the mobile games, there are few games that have endless levels and yet players never give up on the game.

What makes them play a simple game? How come people not bored with endless games? What is engaging in the game, that makes the players addicted to it?

Let us take the example of the popular Candy Crush Saga and find out the techniques they use to engage and attract the players.

The Stockholm based company, King created the Candy Crush Saga that has millions of dedicated players. According to a survey taken among 1000 players, 28% play during their working hours, 32% of them ignored their family and friends to play the game, while 10% of the players got into arguments while playing, and 30% of the players have reported that they are addicted to the game.

While there are many entertaining games available out there, what makes this game so addictive?

The answer to this question is quite simple. King has implemented fundamental game mechanics into their game, and those mechanics put together derives an incredible game that earns over a million dollars every day through the in-app purchases.

1. It Makes You Want More

The starting levels of the game are easy to play, and the players can effortlessly gain three stars for crashing and matching the candies. The players have five lives to crush the candies. If they are unable to complete the task within the given lives, they have to wait for 30mins to resume the game. And impatient players pay to play the game.

The players can easily cross the first 10 to 15 levels on their first try with three stars. The players feel that it is an easy game they are destined to play. They continue to play to see how far they can go without losing their lives. To encourage the players to continue the game, the players were given new cool ways to crush the candies, special moves, boosters that provide extra moves.

In further levels, the players will pay for freebies. But in the initial stages, they are offered with few boosters and extras. This makes the players addicted to the game and surprisingly they would have reached the 35th level by this time.

2. It Rewards Your Progress

Players are excited every time they complete a level. As mentioned earlier. The players gain three stars and the scores are based on the points received by them. But players do not know that these are default reward points built in the game.

The players are aware of the further levels using the map, which shows the train track that passes through the levels. Another game technique is, players should not be stuck in a particular level more than the requisite time. So, as a Candy crush player, you would have seen the glowing hints that appear on the screen if you stumble with the next move. The main objective of the game is not to make the players wait for a long time.

3. It is Creative And Empathetic

If you have noticed the Candy Crush game, no two boards would have been similar. At every level, the boards are arranged in random orders. This uniqueness enables the players to use their creativity to crush the candies in their style.

And when players crush a cascade of candies, they are appreciated by words like, ‘Sweet!’, ‘Tasty!’, ‘Delicious!’ and so on. These positive words are one of the reasons for the players to become addicted to the game.

Also, the game uses a small tutorial before the beginning of the game to ensure the players are aware of how to solve the puzzle. This technique empowers the players the confidence to proceed with the game. Certainly, the game is split into various episodes, and each episode has fifteen levels. Just like the traditional video game, the final level is the toughest level and completing this level leads to the next episode. This thrusts the players to play the game on and on.

The game possesses few special candies called charms that have special features and can be used up to three times once activated. Though the cost of the special candies ranges from twenty-five to fifty dollars, players are not worried to purchase it, as it can be used throughout the game.

At the start of the game, the boosters and charms that are purchased by the players are shown. The ones that are not purchased are faded out, but the entire set of charms and boosters are displayed on the screen. This tempts the players to purchase the left out ones form the Collection set.

Therefore, if the player wants to unlock a new episode, they can either get help from their friends or they can pay ninety-nine cents. The game has a built-in mechanism to send their friend’s request and gain extra lives or unlock an episode.

We have now come across different game mechanics used by King to create the most addictive and entertaining game. The main object of this blog is to help the game developers learn the dynamics and game design of this famous game so that they can create something unique and productive in Gamification.